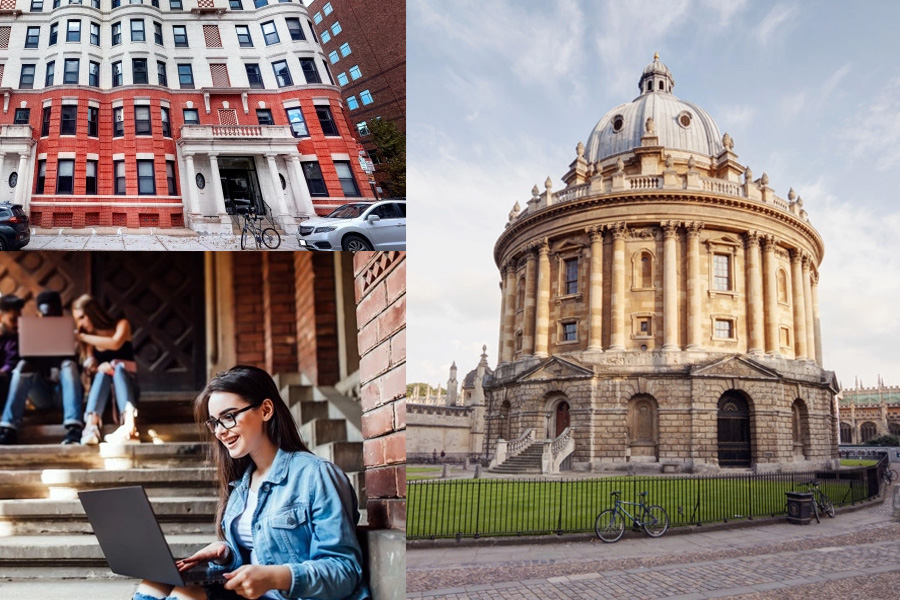 The United Kingdom is well-known for providing the best opportunities for international students with their top-ranking universities and peculiar British charm. Below is the list of the most student-friendly destinations in the UK:

Ranks as the world’s no. 1 city for students and 82nd for affordability. London is home to some of the most iconic landmarks and sites, tourist attractions, and cultural diversity. It has 17 internationally ranked universities. Some of them are: Imperial College London, University College London, London Business School, Brunel University London, and Queen Mary University of London.

Famed for its relaxed and sunny predisposition, Brighton is a well-loved seaside resort, just an hour’s train ride from London. It is ranked 80th for affordability and 92nd overall. Brighton has two internationally ranked universities, of which it is highest-ranked the University of Sussex – is currently 227th in the world and then the University of Brighton.

Located in the West Midlands in England, Coventry is a charming medieval city, once a part of Warwickshire. It is the second-largest city in its region (after Birmingham), the ninth-largest in England, and the 12th largest in the UK. Coventry also ranks 71st for affordability in the best student cities index and 44th overall. It is home to two internationally ranked institutions, including the University of Warwick, which ranks 54th in the world, and Coventry University.

The stunning, mountainous capital of Scotland, Edinburgh, was the filming location for much of the popular Harry Potter movies and is renowned for its green, picturesque sceneries, old medieval castles, and Georgian architecture. It is the 16th best student city in the world and the 66th most affordable city. Home to one of the world’s most prestigious universities – the University of Edinburgh, which currently ranks 18th in the world. Other universities in this location are Heriot-Watt University and Edinburgh Napier University.

In the western Lowlands of Scotland lies the port city of Glasgow, a cultural hub, boasting some of the Scottish nation’s most acclaimed museums and institutions of the arts; the Scottish Opera, Scottish Ballet, and National Theatre of Scotland. Ranked 59th for affordability and 43rd overall, Glasgow is also home to two universities that are within the world’s top 300. The top-ranking universities here are the University of Glasgow and the University of Strathclyde.

Situated in the heart of England, Nottingham with the historic city’s eminent Nottingham Castle Museum sitting at its pinnacle, as well as the Nottingham Contemporary art gallery, there is plenty to see and do here. Nottingham is the 57th best city for affordability and is ranked 47th overall. Nottingham is home to two internationally ranked institutions; the University of Nottingham and Nottingham Trent University.

The city of Newcastle lies on the River Tyne in the north-eastern region of England. It is now a hub for business, sciences, and the arts. As a university city, Newcastle is ranked 56th in the world and 54th for affordability. Student life in Newcastle is frequently praised here due to the city’s well-known friendly atmosphere and relatively cheap living costs. It is home to two internationally ranked universities, the University of Newcastle and Northumbria University.

Manchester is the UK’s second-biggest city and is also ranked 2nd most affordable UK city for international students. Globally, it is ranked 51st for affordability and 24th overall. Manchester is home to one of the world’s most iconic football stadiums – Old Trafford. The University of Manchester and Manchester Metropolitan University are in this location only.

Nicknamed the “Granite City” after its long-existing grey-stone buildings and walls, Aberdeen is a port city located in the northeast of Scotland. It is ranked 55th in the Best Student Cities ranking but is the only UK city in the top 50 for affordability, ranking 47th. Home to the fifth oldest university in the UK, the University of Aberdeen and Robert Gordon University.

Planning to study in the UK?

For more information or queries, feel free to connect with UniXperts, your Xpert Study Abroad Consultants!
Reach out at: +91 80199 21999, to contact us click here.